One of my 2016 new year resolutions was reading more and more novels throughout the year. I started with what I considered a reasonable goal of 1 book per month for a total of 12 for the year. I've been using Goodreads to keep track of my reading collection for quite some time and this seemed like a great reason to start tracking the start and finish dates for each book. Goodreads also holds a "Reading Challenge" every year that makes tracking your year in books even easier! Fast-forward to 2018 and I exceeded my latest goal of 15 by finishing my 23rd book of the year on December 26th! This post is a year in books post-mortem where I'll summarize each book (or series) and look into some statistics for the year.

I started 2018 by finishing the latest installment in the Expanse series: Persepolis Rising. I've been a big fan of the Expanse series and I enjoyed this one particularly because it felt like a refresh of the series. It takes place 30 years after the events of the previous book so the characters have had some time to mature, new colonies have had time to establish themselves, and new characters are introduced. A good setup for the finale of the series.

I found John Scalzi back in 2008 when I read Old Man's War and immediately fell in love with the series. When I heard Scalzi was starting a new series, I couldn't wait to get my hands on it. Enter The Collapsing Empire, the first book in his "Interdependency" series. This novel put a lot of the scaffolding for the series in place and set up the sequel nicely. Unfortunately the sequel didn't make it into my 2018 list but maybe in 2019.

I've been reading quite a bit of sci-fi so I decided to take a little break and explore some other fiction. I found Humans on a top 10 list and was intrigued by the plot and excited to try something from a "new to me" author. This was certainly one of my favorite books for the year. An alien takes over the life of a professor to try and hide a discovery from humanity. This was a fun, silly, and emotional read.

Around February I discovered "Kindle Unlimited" and it changed the rest of my reading year. You won't find the Expanse or a Scalzi book in the "unlimited" library but you will find a great way to explore new authors for a low price per month. My first unlimited book was The Gender Game. While an interesting idea, I didn't enjoy it enough to finish the series.

Jamie and I moved to Maryland in 2017 for her master's program. Maryland isn't exactly known for vast mountain ranges so our climbing took a backseat and was relegated to the gym and 6 hour trips to The New River Gorge. In the mean time, climbing didn't slow down, 2018 saw the release of The Dawn Wall film and a memoir by Tommy Caldwell titled The Push. This book was a quick read that allowed me to escape back to the mountains, even if only mentally.

After reading The Push, I accidentally left my Kindle in the seat-back pocket of an airplane and was suddenly in the market for a new e-reader (good luck trying to retrieve lost property from Southwest). I've used both Nook and Kindle devices in the past and after researching the latest offerings from both readers, I decided to splurge a bit and buy the Kindle Oasis. I'll do an in-depth review later but a cool feature is the ability for the screen to display images while the device is "powered off". Amazon uses this feature to plug other books, which is how I discovered the Breakthrough series. I binged each book in the series back to back which is a fun way to read through a series because I was able to keep the entire storyline in my head without taking months off between books. The series is light and quick which worked well as I traveled between Utah and Maryland for work over the early summer.

Next up was a re-read of my favorite book, The Forever War. I originally read this when I was in high school and absolutely loved it. It was nice to come back and revisit the story and read an actual paperback after primarily reading on my e-readers.

CyberStorm was another "Kindle unlock screen" find from a "new to me" author. I'm a sucker for end of the world stories and obviously technology so a story that marries both seemed like a fun next read. The plot is interesting and the book starts pretty strong but starts to stall out for me as the characters settle into their situation.

The next series would take up a large chunk of my reading time but turned out to be time well spent. Renegade Star is a mix of Firefly and India Jones in space. A fun, super light series that takes place over the course of eight books. I also read through Nameless which is set in the same universe but explores the back story of Abigail. I'd actually recommending reading the first book or two in the Renegade Star series, and then Nameless before finishing the series.

2018 saw the release of a new Battletech game which reinvigorated my interest in the Battletech universe. Coincidentally a new BT book was released, BattleTech: Legacy: A BattleTech Anthology. Instead of a normal story arc, this story follows the 300 year life of a single mech, told from the view point of each MechWarrior who had the opportunity to pilot the mech.

The end of the year brings a return to the Renegade Star universe by reading the first two books in Chaney's new Orion Colony series. These books take place before the Renegade Star series when a portion of humanity leaves earth to establish colonies on other planets. The writing and pacing reminds me of other Renegade Star books and they flow nicely. I'm looking forward to reading more of this series in 2019. 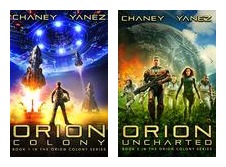 Overall I'm happy with my reading list for 2018 - not only for reading more books than I originally planned, but for digging into the Kindle Unlimited offerings and exploring new authors and universes that I wouldn't have otherwise found. In 2019 I'd like to read more, dip into some non fiction, and try to write a review of each book immediately after turning the last page so I can review them at the end of the year and remember more specifics.